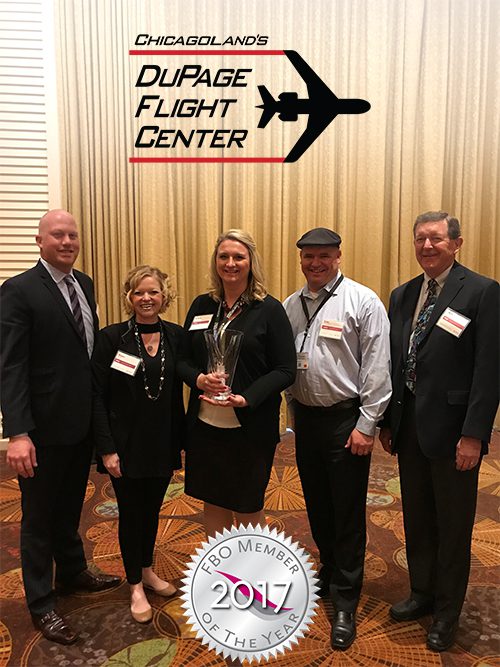 The first award is voted on annually by the member FBOs who choose the FBO that demonstrated outstanding commitment to the network through continuous dedication, enthusiasm, and professionalism. The 2017 Paragon Network™ FBO Member of The Year was awarded to DuPage Flight Center based in Chicago, IL (KDPA). Throughout the year, DuPage Flight Center has exhibited the above-mentioned qualities by consistently ensuring that each customer’s visit is flawless, participating at a high level, actively sharing best practices, and serving as a role model and mentor to other Paragon members. Learn more about DuPage Flight Center, by visiting AwesomeFBO.com.

The recipient of the 2017 Manager of The Year was awarded to Brian DeCoudres, General Manager at DuPage Flight Center. “Paragon Aviation Corporate voted unanimously for Brian,” said Megan Barnes, Executive Vice President of Paragon Aviation Group®. “Brian is determined to maintain an unparalelled level of service at DuPage Flight Center. His dedication to service is seen through his ability to lead his team and ensure they exceed customer expectations every time they fly into DuPage. Brian has worked hard to deserve this award and we are proud to have him in our network.”

The winner of the 2017 Award of Excellence, also voted on by the members, went to Chris Salley, Marketing Manager at National Jets based in Fort Lauderdale, FL. “Over the past year, Chris has really taken the initiative to utilize the network to the fullest ,” stated Scott Jefvert, Director of Sales for Paragon Aviation Group®. “He not only uses the network to benefit his own FBO, but is also actively selling on behalf of his fellow member FBOs and continuously providing support to others in hopes that they will be equally successful. We are extremely proud to have him in the network and we are delighted to recognize him for going above and beyond.”

Paragon Aviation Group® LLC is a family business owned and operated by Mike Delk, Megan Barnes and Molly LeBlanc. With their combined industry experience of over 75 years they have introduced an exciting new industry platform for premier aviation service providers.

For more information, contact Amanda Ellison at (281) 407-0541 or AEllison@ParagonFBOs.com.